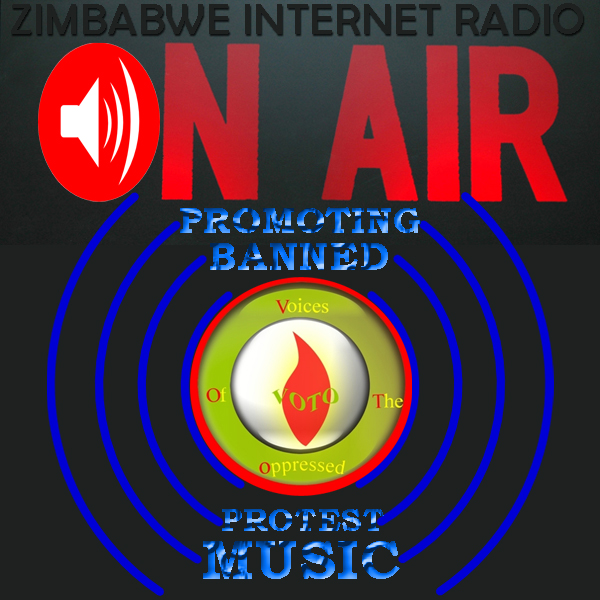 THE BIRTH OF VOTO (VOICES OF THE OPPRESSED) INTERNET RADIO

In 2008 Viomak found a way of evading censorship and refused to be silenced .On 18 April 2008, Zimbabwe’s historical Independence Day, she launched VOTO (Voices of the Oppressed) an internet radio station with the aim to promote freedom of musical expression and free speech in a country where opposing voices are severely oppressed, tortured and murdered for despising wrong and demanding what is right. Viomak launched the internet radio because she believes that instead of protest artists crying foul over the banning of their music and other protest art, they should uncensor themselves by coming up with ways of making themselves heard. The radio station invites all protest singers whose artwork is banned in Zimbabwe and all outspoken Zimbabweans to use it as a platform to musically voice their concerns and views without fear of repression from ZanuPF or any other haters of free speech. The radio features work of censored and banned Zimbabwean performing artists, especially musicians, fine artists and creative artists.

VOTO radio station helps Zimbabwe protest artists escape censorship and give them a free platform to be heard away from ZanuPF and Robert Mugabe’s repressive laws POSA and AIPPA which hinder freedom of expression. The radio station is not only a haven for Zimbabwe protest artists but it is also a source of education about the Zimbabwe situation and strives to educate Zimbabweans on their political responsibilities which include their right to speak out and be heard. VOTO radio station strives to educate Zimbabweans on their political responsibilities which include their right to name and shame all toxic politicians in all political parties. The radio also promotes the tradition electronic artist-activism which is one of the most effective ways to skirt censorship and oppressive regimes, and challenge restrictive state policies in Zimbabwe. VOTO radio challenges ZanuPF policies and practices that abuse human rights and impede on freedom of expression, thus facilitating the democratization of mainstream art and societies. The radio station is positively working as an expressive space in which Zimbabwe protest artists are combining their passions for art and socio- political change thus speaking to the world about the common struggle for freedom and democracy in Zimbabwe . With a potential audience of the whole country, VOTO radio provides a perfect platform for freedom of speech and freedom after the speech.

It has been very difficult for Viomak to have her own music played on other Zimbabwean internet radio stations too because they prefer to play and promote happy music genres than protest music forgetting that protest music is about their livelihoods and survival. One other Ndebele Zimbabwean musician Lucky, who last year released some protest songs suffered the same fate from the so called independent Zimbabwe radio stations which are not willing to play his protest songs. VOTO is helping to play his music and send his messages to the public. Lucky explained to Viomak how he contacted some Zimbabwe online radio stations in the diaspora only to get unconvincing negative responses from the owners who were not willing to play his protest songs. In light of this, VOTO radio station is calling all interested Zimbabwe protest artists to come forward and be part of this freedom of expression project.

VOTO radio station offers a dual cast service which operates both on an on demand and live streaming basis, and it opens with an instrumental version of the Zimbabwe national anthem. Viomak compiles some of the programmes which include miscellaneous protest, a programme that showcases various Zimbabwe protest music. The art is selected from a range of protest songs by artists like Thomas Mapfumo, Raymond Majongwe, Leornard Zhakata, Hosiah Chipanga, Viomak, Lucky Moyo, Tsunami, Paul Madzore, Dread Reckless and other protest songs from various unknown singers such as songs like Zimbabwe and Freedom by Sinini Ka Ngwenya. Other interesting tracks that are aired include songs supposedly done by Zimbabwean white farmers, namely Mugabe repossessed my farm whose lyrics are heavy with meaning and mention that Bob runs the country in his sleep if only Bob Mugabe had not run for presidency Mugabe go to hell. The radio also disseminates to its audience banned protest poems or spoken word by protest artists such as Farai Munro which are also featured on the radio station days on end. In between the music, political speeches are aired. For instance, a five-second speech by Ian Douglas Smith, the prime minister of Rhodesia where he said, I don’t believe in black majority rule ever in Rhodesia, not in a thousand years. Such kind of speeches remind listeners of Smith’s popular speech where he boasted that he would rather put his coat on the presidential seat instead of putting a black leader, implying that his coat would do a better job than a black president. Programmes in the pipeline include Prayers for Zimbabwe where political gospel music will take centre stage alongside child and women issues. VOTO radio station has been well received, with an average of 2770 clicks a day to date. With Zimbabwe on the 7th place in the top ten of the list of 68 countries that visit Viomak’s website, she is convinced that VOTO radio station is reaching its intended audience in a safe manner.

Viomak said she was inspired by the Voice of Zimbabwe radio station to pursue VOTO radio station .In the 1970s, during Zimbabwe’s chimurenga war, the Voice of Zimbabwe radio was beamed from Maputo, Mozambique, and used by ZanuPF to educate, mobilize, and recruit supporters. During the same period Zapu’s People’s Voice radio was broadcasted from Dar es Salaam, Lusaka, and Cairo and on Radio Moscow.

The Voice of Zimbabwe included such programmes as The Chimurenga request programme which was dedicated to those involved in the struggle. During that period Dorothy Masuka, Thomas Mapfumo and ex-combatant Cde Chinx Chingaira were popular revolutionary musicians but Chingaira was later to emerge as a pro ZanuPF supporter. The songs that were played in these programmes boosted the morale of the fighters, motivated and inspired others to take action, thus in Viomak’s words, “in those trying times music was the best therapy.” When utilized appropriately music can be a massive weapon during a struggle for emancipation since it keeps the oppressed informed and entertained. Songs of struggle are therefore a source of inspiration and hope. On a similar style and purpose, VOTO radio station broadcasts worldwide, courtesy of the internet. President Robert Mugabe who at one time had a wild dream of banning the internet in an effort to censor his critics put the plan on hold after the idea hit a hard rock because oppressors cant oppress the internet.

On 24 November 2007, Viomak was interviewed by Pamela Stitch of African Loft on the story of political gospel, and when asked if she had faced any challenges in her brand of music she responded, “Very big challenges. I live on verbal insults mainly from ZanuPF supporters, and praises and salutations from my dedicated fans. Some Zimbabwean newspapers are not eager to write my stories for fear of reprisals. Some Zimbabwean internet radio stations are not eager to play my music for the same reason. My music is banned in Zimbabwe. Some people don’t buy my music because they fear for their lives. Most of those who buy the music play it secretly. My music is the first of its kind and a few others don’t like my idea of mixing gospel with politics. So my music is very controversial but the good thing is I have more fans than enemies. When Viomak was asked about the purpose of her continuing to sing yet she faces all these challenges she said you keep hoping that one day God will help us change the situation in Zimbabwe and that Zimbabwe will change their mindset and vote for good leaders and not for political parties. She added hope gives us the zeal to move on until we achieve our goals and VOTO radio station gives us the hope that one day freedom will come if we keep trying different manner ways of attaining freedom.

Viomak’s CDs and cassettes are at times sold unclenched or labelled particularly in Zimbabwe, so that they won’t be noticed by her enemies. This idea doesn’t go down well with buyers who are not used to seeing such kind of music packaging. Viomak narrated how she was duped by some MDC-T high ranking officials in the UK and South Africa who crooked her when they offered to be selling agents of her music only to disappear for good with the music and some proceeds she was to donate to charity. Zimbabwe protest musicians face such kind of challenges since they do most of the marketing and promoting on their own due to the sensitivity and the risks their music entails. Now that the goal of setting up an internet radio station has been achieved what is left is to work on it so that it becomes a bigger project that will rise from being an internet radio to an actual radio station that rises above the ground and have a place in Zimbabwe’s broadcasting industry. Viomak’s expertise in linking radio to the struggle for human rights and human dignity is innovative and unshakable.

IN HER OWN WORDS

“Voices of the Oppressed internet radio was set up to help Zimbabwe protest artists escape censorship. Our work is banned on state media by the government’s repressive laws which criminalize freedom of expression. After being denied the freedom to express my voice, my music was deemed too political and negative of my native Zimbabwe’s current government to be played on traditional radio or TV , or to be advertised in traditional media , I thus decided to turn to internet radio to promote my music. VOTO is not only a haven for fellow Zimbabwean protest artists but is also a source of education for all and a way of evading danger from those who hate to hear truth .The Internet is not only helping artists create virtual studios or encourage new forms of art education, but it is also promoting the tradition of activist-art. Electronic artist-activism is one of the effective ways to skirt censorship and oppressive regimes. Online artists-activists are an example of how the internet has become part of a revolution and a hiding place for artists not only to promote their individual work and others’, but more importantly, to evade and challenge unnecessarily restrictive state policies and laws. Radio itself is an art, and presenting is performance. VOTO radio is thus used as a platform for innovation in the arts , a vehicle for promoting the arts and explore the developing relationship between the internet ,radio and the arts .This benefits individuals, protest artists and communities. VOTO radio is also used as a way of encouraging emerging talent and develops new audiences for the arts. I believe in collective bargaining so the more people come together to initiate change the faster the process. The internet radio is positively working as an expressive space in which Zimbabwe protest artists are combining their passions for art and socio political change thus speaking to the world about the common struggle for social justice and political justice . VOTO internet radio is a case in point.”