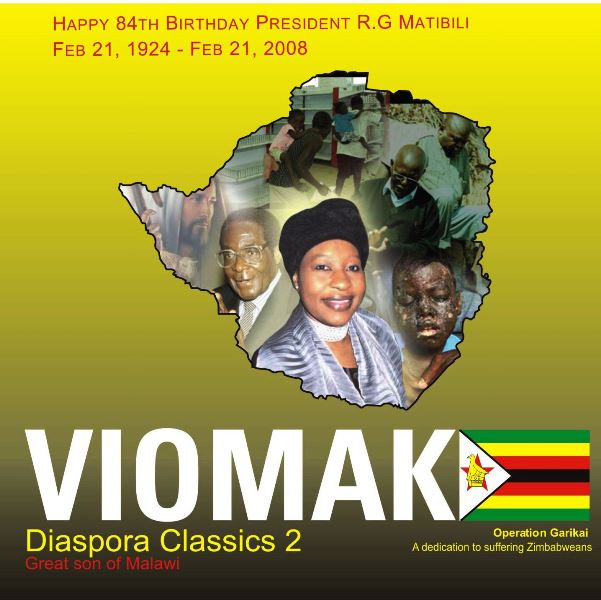 2: If you are buying from developing nations such as ALL countries in Africa you may arrange direct Ecocash transactions to mobile transfer Ecocash number to 0771516725 Violet Makunike, Mutare, Zimbabwe. The music is only sent to buyer on email as MP3’s or on WhatsApp or other send platforms at that time. No hard copies are posted to developing nations. Once the transaction has been confirmed please send a text message or WhatsApp +263 (0)771516725 or +263(0)783524049 or email [email protected] with your confirmation and the product/s will be sent to you.

Option 3: All MP3’s are us$1 each and only emailed or sent on WhatsApp or other available send platforms. May you please follow the buying instructions above.

Happy 84th Birthday President R.G .Matibili album title was inspired by stories in Zimbabwe’s media that said Mugabe is a Malawian whose ancestral surname is Matibili. It was mixed and mastered in Zimbabwe, at the same secret studio that produced Viomak’s two previous albums. She won’t tell anyone the location of the studio for fear of persecution. The voices were recorded in Britain where Viomak is presently residing. As with her previous albums all lyrics were written and sung by her. She says that right now her music is seeing the darkness of night but there will come a time when it will see the light of day. The album is also available in acapella and instrumentals in addition to the actual songs blending vocals and instruments. Song 3 Kutonga kwaMatibili is Viomak’s most favourite. All the songs were sung by Viomak. 50 % of proceeds are donated to various charity causes. The songs on the album are:

On 21 February 2008, Zimbabwe’s president Robert Gabriel Mugabe, Matibili celebrated his 84th birthday in the southern border town of Beitbridge, whilst exiled singer Viomak officially released her third protest music album entitled Happy 84th birthday President R.G Matibili (Great Son of Malawi). As on her previous albums the messages in the songs are very clear and direct, which is why her truth music is heavily censored and has never been played on state radio in Zimbabwe.

The opening song Garai makagadzirira (Be prepared) reminds all those who are impatiently waiting for Mugabe’s departure to keep their fingers crossed and prepare themselves for life after and without Mugabe. Viomak assures her listeners that God will deliver Zimbabweans from evil. The second song, Zimbabwe yochema (Zimbabwe is crying), is a message of assurance to Zimbabweans that God has heard the crying of the suffering masses in Zimbabwe and he will deliver the nation from all forces of evil. The chorus of the song repeats how Zimbabweans should be prepared and assure them that the day will come when the nation is going to be freed from ZanuPF misrule, selfishness and unethical leadership.

The third song, Kutonga kwaMatibili (Matibili leadership) which is Viomak’s favourite track on the album, shows her selflessness when she narrates and acknowledges how Mugabe’s critics have suffered torture and beatings in the hands of ZanuPF CIO’s (secret agents), police and soldiers. She also mentions how Mugabe’s misrule has destroyed Zimbabwe due to corruption, incompetence and political violence. In the same song Viomak sings about how Mugabe is a well-known foul mouthed president who said Zimbabwe Congress of Trade Unions (ZCTU) secretary general, Wellington Chibhebhe’s big tummy is full of air, MDC-T opposition party president , Morgan Tsvangirai has an oversized heard, and that South African archbishop Desmond Tutu is a little Bishop. The thought provoking song narrates Mugabe and ZANUPF brutality on citizens in a manner that leaves listeners not only curious about what the lyrist will say next but also leaves listeners in a joyful mood. The artistic defiance in this song brings out Viomak’s courage accompanied by a multitude of Zimbabwe beats.

The song Zimbabwe yoshuwa zororo chronicles a nation of citizens who are longing for peace as they are languishing in a pit of fire under Mugabe regime. Similar messages are conveyed in the song Vatungamiri vatsvene which is a rendition of a popular church hymn. Viomak sings her heart out as she reminds Mugabe and ZanuPF that selfish leaders will not see the gates of Heaven. The song Mune basa muZimbabwe translated to you have work in Zimbabwe is a thought-provoking track that I believe will make Mugabe repent if he listens to it. In the song, Viomak is generous with her words and informs God that He has a big task in Zimbabwe, and kindly asks Him to come down and deliver Zimbabweans from ZanuPF chains. In her usual soft voice Viomak assures God that Zimbabweans are patiently waiting for His intervention and Zimbabweans will do all they can to save themselves from the wrath of ZanuPF. In the song Vatungamiri Vatsvene, Viomak sings that bad leaders will not go to heaven, but only good leaders will see the Kingdom of Heaven. She warns Mugabe who she refers to as Matibili that when his day of reckoning comes Jesus will take him without a welcoming smile on His (Jesus) face.

The last two songs on the album Mukatenda ndikatenda and Freedom train is coming give hope to Zimbabweans that even though times are tough now , there will come a time when freedom with be attained . The songs are also loaded with rich spiritual messages and politically laced lyrics typical of her music, accompanied by a variety of unique Zimbabwe beats. Viomak’s lyrics are both humorous and sorrowful and are laced with mindboggling messages of despair, desperation and hopelessness. The lyrics say nothing else other than the painful truth and the creativity she uses in the way she composes her lyrics is very effective and thought provoking. Viomak says her messages must be delivered gently as she will be asking God to intervene in the situation in Zimbabwe that’s why the music is toned down. The tunes bluntly demand an end to President Robert Mugabe’s rule and belong to Zimbabwe’s tradition of protest music that her fans say give hope and comfort to the country’s suffering masses.