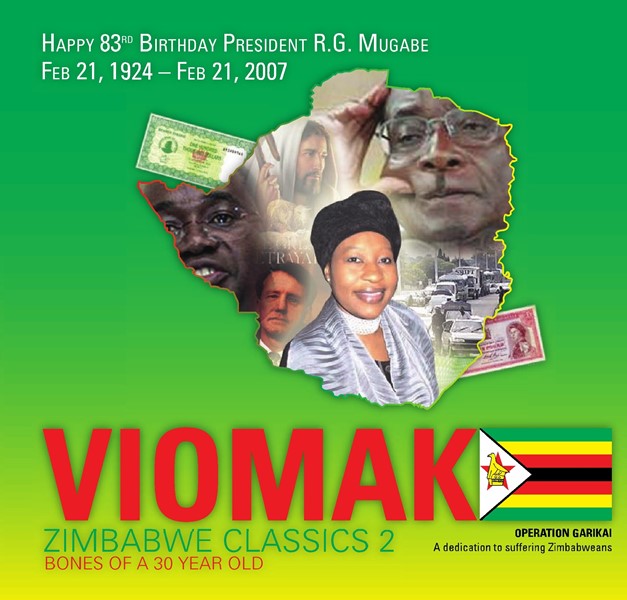 Option 3: All MP3’s are us$1 each and only emailed or sent on WhatsApp or other available send platforms. May you please follow the buying instructions above.

Happy 83rd Birthday President Mugabe (Bones of A 30-Year-Old) is an 8 track compilation of soulful and hard-hitting ballads that tell of a country in crisis and of leaders impervious to the idea of relinquishing power. Viomak drags listeners back to reality when her lyrics turn from the tribulations of love to those of a country speeding even further into socio-political chaos. This protest music is banned from the airwaves of state-owned media. The album is dedicated to God the Almighty and Zimbabweans who are suffering under the merciless Robert Mugabe’s ZanuPF regime and with no voice to share their concerns. It was recorded in Zimbabwe in November 2006 at a hidden studio in the capital Harare and was officially released on 21 February 2007 .The album is also available in acapella and instrumentals in addition to the actual songs blending vocals and instruments . Song 3 Gono bvisa Father Zero is Viomak’s most favourite. All the songs were sung by Viomak. 50 % of proceeds are donated to various charity causes. The songs on the album are:

2. A man in Zimbabwe
1. There is a man in Zimbabwe, His name is called Robert Mugabe
He tortures critics and beats them to death, How can a man be so evil.

2. There is a man in Zimbabwe, His name is called Robert Mugabe
He lets his people starve to death, How can a man be so evil.

3. There is a man in Zimbabwe, His name is called Gabriel Mugabe
He leaves the sick to die in pain, How can a man be so evil.

4. There is a man in Zimbabwe, His name is called Gabriel Mugabe
He teaches people hate, crime and war , How can a man be so evil.

5. There is a woman in Zimbabwe, Her name is called Grace Mugabe
She looks as children are abused and raped, How can a mother be so evil.

6. There is a woman in Zimbabwe, Her name is called Grace Mugabe
She is expensive and selfish, How can a woman be so evil

7. There was a darling in Zimbabwe, Her name was called Sally Mugabe
Children she gave love, kisses and hugs, How can a woman be so loving

8. There was a darling in Zimbabwe, Her name was called Sally Mugabe
She cared for children and Zimbabwe , Mother Zimbabwe Sally Mugabe

Viomak’s latest album, Happy 83rd Birthday President R.G Mugabe (Bones of A 30-Year-Old) is a compilation of soulful and hard-hitting ballads that tell of a country in crisis and of leaders impervious to the idea of relinquishing power.

The latest album makes much better listening that her previous work, and is better organized and more original. It is also a frank assessment of the crisis in Zimbabwe and rightly squares the blame on Mugabe’s doorstep, who she accuses of being locked in denial. The album delivers one straight message: Mugabe must go if the country is to be saved from further collapse. The album is a sequel to her first album Happy 82nd Birthday President Mugabe, Diaspora Classics, which was relatively popular. The eight-track album features classic political gospel tunes such as , Arise and fight ,A man in Zimbabwe,Gono bvisa Father Zero , Ipaiwo vasina ,Tererai Mwari , Mangwanani Baba, Mugabe usambozvinyengedza and Inzwa Mugabe.

The song Arise and fight is a self-explanatory rendition of the gospel song Arise and Shine which Viomak conveyed into a political message motivating Zimbabweans to arise and denounce Zanupf and Mugabe leadership and make them history. Viomak is sounding like a liberation songs maestro as usual, the only drawback being she churns out the soft melody which can be easily mistaken for a love song. However the message is well articulated, relaxing and calming such that listeners feel her empathy and motivation to do something about Zanupf and Mugabe and not forgetting the needy. Not forgetting that , if you listen to the song more than once it would sound rather monotonous but because of the captivating lyrics and sombre voice one will not stop to think and reflect about Zimbabwe and her hopeless and bleak future. The lyrics not only combine with the voice well, but they also merge with the instruments well.

A man in Zimbabwe chronicles the life of an evil president and in the song Viomak questions and wonders how a man, Robert Mugabe and his wife, Grace Marufu Mugabe can be so evil. Viomak narrates how this family is a curse to Zimbabwe and wishes Robert Mugabe’s rest in peace wife Sally Mugabe, Sarah Francesca was alive and compares her to a humble Angel who was there for the needy. The song is a wishful and mindboggling piece of art that brings the spirit of Sunday school into the world of protect music. The song is an emotionally captivating piece derived from a religious Sunday school tune and it is associated variably with worrisome, passionate lyrics and low beat instruments.

Gono bvisa Father Zero is Viomak’s favourite song and is pregnant with meaning like the other songs. The song challenges the Governor of the reserve bank of Zimbabwe and Robert Mugabe’s right hand man Gideon Gono to remove Mugabe from power and not the zeros from the currency. Overall, this is a strong production, and Viomak deserves special praise for composing appropriate sounds of the time at a time when Zimbabwe is struggling with a dead economy. The song is a historical masterpiece whereby Viomak has responded swiftly to the government’s recent introduction of a new currency through the damning song titled Gono Bvisa Father Zero (Gono remove Father Zero), an indirect reference to President Robert Mugabe. The song, whose lyrics are pregnant with political vitriol, places Gideon Gono and Robert Mugabe on the firing line dismissing the currency reform as a cosmetic move aimed at buying time for Mugabe. The song places Viomak on the artistic pinnacle of this genre and she has grown to be the only direct lyricist of Mugabe’s trenchant critics in the arts world due to his skewed policies that have left Zimbabweans living from hand-to-mouth and leading destitute lives.

With all the confidence and truth, Viomak courageously sings that Gideon Gono should understand that the problem is not the zeros but Mugabe is the problem. She reiterates that the problem is still pending and there’s no way Gono can get a viable and workable solution for Zimbabwe’s economic crisis without solving the problem which is Mugabe. There’s no point in sweeping the ashes without extinguishing the fire she says and the removing of zeros from the monetary figure is just a ploy to steal monies from the ordinary person typical of failed Zanupf. Gono last week slashed the country’s currency by three zeros with Mugabe’s blessing through the Presidential Powers (Temporary Measures) (Currency Revaluation) Regulations 2006, a measure government claims will wrestle skyrocketing inflation and corruption rampant among influential figures. Millions of Zimbabweans have lost millions of dollars since the launch of the ongoing currency reform operation codenamed Project Sunrise with police seizing money in excess of $100 million from individuals at roadblocks dotted throughout the country and borders .This is what motivated the composition of the musically memorable masterpiece which is passionately , communicated through absolute revolutionary art.

The song Ipaiwo vasina (Give the needy) proves that for Viomak as per her musical mission, this is about more than just the music. The song is more suitable for serious reflection and meditation and is a revival of the popular religious song Showers of Blessings. Charity work is the cornerstone of her work .In her own words Viomak says her music is transforming society in a positive way and her thoughts are concerned with ethics, morality and values in society and the need to enhance the wellbeing of others and ourselves. “My artwork gives me personal satisfaction that I’m doing what is morally right by helping others and speaking on their behalf through music”. She penned the song to inspire giving the needy and she came up with a quotation that cements her mission “You give not because you have more than enough but because someone doesn’t have enough.” She definitely reflects this notion in this song. Viomak encourages Zimbabweans to help the needy while blaming Zanupf and Robert Mugabe for being heartless and selfish people with no people or nation at heart.

The last four songs are an exploration of different political and religious messages as in the heart breaking spiritual song Mangwanani Baba (Good morning father). Viomak narrates to the Heavens how Zimbabweans’ are suffering and narrates to God that the selfish and evil Mugabe and his party leaders are living BIG, stealing public funds whilst Zimbabweans are chewing air. She asks God to talk to Mugabe so that he leaves power as this poverty, unemployment, destruction of infrastructure and political violence cannot go on as she mourns is song.

The delivery of the songs suggests that Viomak is so sick and tired of the political crisis and social disintegration in Zimbabwe and the intention is not only to sing about it but it is also for preying on Zimbabweans’ emotions and evoke action. The lyrics are a resilience of determination backed by passionate and patriotic vocals. The vocals alongside a variety of beats provide sounds that are dominated by sad tones which reflect desperation for ZanuPF and Mugabe to go. There is special flavour and strong emotional substance in her voice and the touching vocals leave some listeners with watery eyes and tears flowing down their cheeks. The songs convey emotions not only through Viomak’s velvety voice but also through touching lyrics and are a decent and worthwhile listen for patriotic Zimbabweans who have Zimbabwe at heart and yearn for good leaders and prosperity for the troubled nation. This protest music album like her previous album is banned from the airwaves of state-owned media in Zimbabwe.