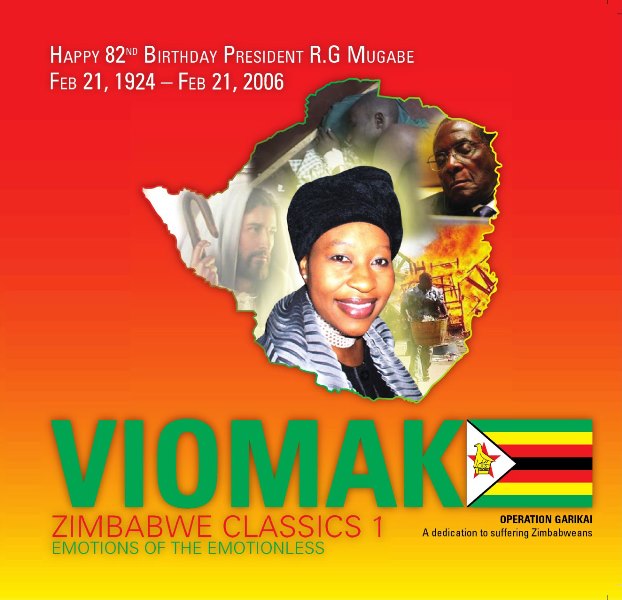 3: All MP3’s are us$1 each and only emailed or sent on WhatsApp or other available send platforms. May you please follow the buying instructions above.

This 8 track music album is dedicated to God the Almighty for inspiring me to do this work for humanity and to all Zimbabweans who are suffering under the merciless Mugabe’s ZanuPF regime home and away and with no voice to share their concerns. The album was initially recorded in Canada in February 2006 as Diaspora Classics 1, and was re- recorded in Zimbabwe in October 2006 as Zimbabwe Classics 1 The album is also available in acapella and instrumentasl in addition to the actual songs blending vocals and instruments. Song 3 Unoendepi Mugabe is Viomak’s most favourite. All the songs were sung by Viomak. 50 % of proceeds are donated to various charity causes. The songs on the album are,

Happy 82nd Birthday President R.G .Mugabe is a political 8 track music album flavoured with religious Zimbabwe beats .The song Uchaenda rini Mugabe (When are you going Mugabe) bemoans Robert Mugabe’s long stay in power and the desperation of anti –Mugabe Zimbabweans and citizens around the world to have him leave power. The song asks Mugabe when he will leave power and reminds him that he is not God, and that Zimbabwe does not need him anymore since he has done more harm than good. In the song Viomak delivers a very touchy soft melody, a lullaby that listeners can mistake for a love song. A commentator said strange that a protest song against dictator Mugabe would sound so soft and sweet.

Ndofamba neDiaspora (Globetrotting in diaspora) is a heart breaking tune that chronicles the suffering of Zimbabweans as they are globetrotting with no hope that their country will be the bread basket of Africa as it used to be anytime soon. Viomak sings about how Zimbabweans are leaving their poor country in search of greener pastures in the diaspora where life is much far better than in Zimbabwe. As Viomak reminds listeners that diaspora countries are economically rich she is mindful or reminding Zimbabweans that Canada, America, Britain is not home but are just temporary shelters otherwise Zimbabweans will go back when the time comes. The song is blended in a repetitive catchy chorus that captivates the mind in a sorrowful voice characterised by solemn lyrics and deep instruments that all in a nut shell, consolidate into a masterpiece that scratches the brain and drowns one in tears.

The song Unoendepi Mugabe (Where will you go Mugabe) is Viomak’s most favourite song on the album. She sings asking Robert Mugabe where he will go after death and reminds him that rest after death is for the righteous and not for the wicked like him. Viomak advises Mugabe’s wife Grace to ask her husband where he will go after his death in a soft and peaceful tempo that lives one wondering what the next musical episode will bring. As the mind is blown into a heavenly bliss by the persistent question ‘where will you go Mugabe’ that Viomak constantly asks Robert Mugabe, the track plays to the background of rich well organised instruments and a melody that can only send one into a slumber in deep thought about an uncertain and hopeless future ahead courtesy of Robert Mugabe and Zanupf’s bad governance. The sombre stricken vocals easily drift one’s mind into an excitement of life after death as Viomak reminds Mugabe to repent, and ask God to forgive him. Viomak does not forget that she is also human and asks herself where she will go after death and advises listeners to sing the same lyrics asking her where she will go after she dies. As usual the well-arranged instruments don’t seem to let the vocals down as they sync in a well-crafted way that grants an opportunity for listeners to dose towards the journey ahead with its moderate energetic beat as Viomak makes her way through the song in a tearful way that reminds listeners that we will all die.

Hatina rugare muZimbabwe (We have no peace in Zimbabwe) is a lyrical masterpiece. The only disappointment is this is definitely one of the saddest songs Viomak has sung. This song is a thought provoking wishful ballad melodic enough to get the listener’s attention amid watery eyes as Viomak sings out her wish to be buried in Zimbabwe where her mother was buried. She wishes Robert Mugabe’s first wife Sally Mugabe was alive and wishes she had wings she would fly away and go and get Sally back to Zimbabwe. Viomak compares Sally to Grace and clearly states Grace is just a heartless shopping monster and asks Grace how she would feel if her own children were starving to death .Viomak cruises amid a string of captivating instruments and sings about a tortured Zimbabwe under ZanuPF, Zimbabweans so emotionally drained and hope in God and wish that a miracle happens and ZanuPF and Robert Mugabe will just be history. She sings about how Zimbabweans wish for peace and ask how Robert Mugabe’s police force, army and stage agents terrorise and murder opposing voices and innocent citizens. Viomak reminds Zimbabweans that by the time Zimbabweans in the diaspora go back home Zimbabwe will be a Chinese Zhing zhong infested country since Mugabe chose to look East and the country is being colonised by the Chinese. She ends the said song with a promise that Viomak will continue to do God’s work, charity work and defending human rights and calls upon others to help the needy.

Izwi radaidzira (Voices are calling) is a liberation song calling for Robert Mugabe to resign and reminding him and ZanuPF that different voices are saying ZanuPF must go. The song is followed by yet another very sad song Tapera muZimbabwe (We are perishing). The song typical of the songs on this album is also a political gospel song where Viomak chronicles the political torture, the struggles of Zimbabweans crossing the border into South Africa, the dying and suffering due to Mugabe’s failures while calling for divine intervention as Zimbabweans struggle on.

The fast beat song Zimbabwe mudumbu reZanuPF (Zimbabwe in ZanuPF belly) is pregnant with meaning. Viomak draws attention towards belly issues and likens the Zimbabwe situation under ZanuPF to a belly where the country is inside ZanuPF with no way out. She showcases lyrics that describe Zimbabwe’s collapse as the song emphasises how crucial it is for Zimbabweans to pay attention to Zimbabwe’s cries for help and be part of the solution to save this great nation from the jaws of ZanuPF. Viomak also calls on other protest musicians to continue raising awareness. The song is so unbelievably phenomenal and masterfully crafted as it touches on so many crucial issues while calling everyone to play their part in rescuing Zimbabwe.

The album draws to a close with the political gospel song Zimbabwe iripi (Where is Zimbabwe). Like all the other songs on this album, Zimbabwe iripi has its own distinctive sounds popular during yester years at Sunday school embraced in a lively and jovial beat that makes it the most danceable song on the album. She sings that Zimbabwe’s freedom fighters fought for nothing as Zimbabwe has been destroyed by black people whilst complaining that Robert Mugabe, his leaders and families are living pretty yet Zimbabweans are starving and leading lives like wild animals. Viomak asks God to take away Mugabe and denounces the disastrous land reform programme that saw ZanuPF grab farms from competent white farmers and gave the farmland to incompetent black farmers and this has given rise to a dead economy. Viomak cruises with the touchy beat while highlighting that Mugabe and ZanuPF are not on Heaven’s list due to their evilness, corruption, selfishness and incompetence and wonders where Zimbabwe is. Viomak again touches on so many issues in this song from desperate Zimbabweans globetrotting, to hospitals with no medicine, dirty water, useless currency, no electricity, no formal jobs, starving masses and empty hospitals while ZanuPF leaders and their families have plentiful. Viomak laments ZanuPF and Mugabe’s evilness and asks God to literally come down from Heaven to help Zimbabwe and destroy ZanuPF and Robert Mugabe. Viomak ends the song by singing that the truth she has sung will get her killed by ZANUPF and seeks God’s protection. With this offering Viomak has managed to release the most exciting and unique protest music album in the history of Zimbabwe which has put her on the musical map not only as the only female Zimbabwean protest singer but also as the most courageous protest singer who has mentioned ZanuPF and Robert Mugabe in her songs by name. We look forward to the next offering.