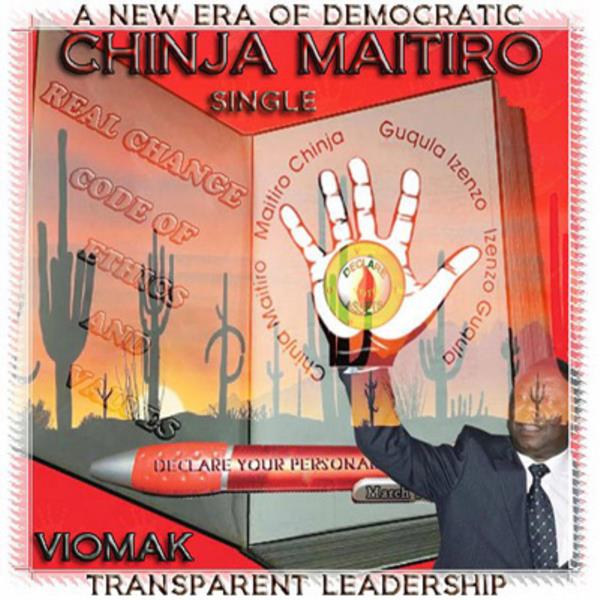 SINGLE ON CD: US$2 Equivalent to Zimbabwe currency at the time of purchase

Option 3: The MP3 is us$1 and only emailed or sent on WhatsApp or other available send platforms. May you please follow the buying instructions above.

Option 4: Ready to go instrumental is available for sound tracks for documentaries, films, trailers, voice over and other multi-media projects for this album and many others that are not on this website. The instrumental is over 5 minutes long, in MP3 format. The instrumental is US$100 for both developed and developing nations. Once the transaction has been confirmed please send a text message or WhatsApp +263 (0)771516725 or +263(0)783524049 or email [email protected] with your confirmation and the product will be sent to you.

Viomak’s political activism has seen her become a renowned Anti -Corruption activist since 2001 before she started recording protest music and after 2005 when she started using music as a tool for her activism. Since then she also uses music to denounce Zimbabwe government leaders’ corruption. On 12 February 2009 Voices of The Oppressed (VOTO), an organisation run by political activist cum protest singer Viomak, spearheaded a campaign seeking to have all MDC Government of National Unit (GNU) leaders declare their personal assets in a bid to hold Zimbabwe leaders accountable as a way of monitoring corruption and achieving democracy through transparency. Viomak is a pioneer of the Declare Assets campaign which saw her release the single song Chinja Maitiro (Change your ways) in which she calls on the opposition party Movement for Democratic Change (MDC) leaders to declare their personal assets to combat corruption and for the opposition party to show that they are not as corrupt as ZanuPF leaders thus doing the right thing to declare their assets.Viomak composed and released the single song to cement (VOTO) Anti-corruption campaign for Zimbabwe government leaders specifically (MDC) leaders to declare their personal assets.

In support of the campaign Viomak wrote a petition explaining the proposal and made various efforts to have the petition signed by as many people as possible and then handover the petition to the government of Zimbabwe. She also communicated with MDC opposition leader Prime minister, Morgan Tsvangirai’s spokesman James Maridadi to ensure word gets to the leaders for them to declare their assets to combat corruption.

After the campaign media reports on 28 February 2010 and on 02 March 2010, confirmed that MDC –T leaders had agreed to declare their personal assets. According to the reports the officials were required to declare their assets before taking office in new regulations contained in a document named the ‘Real Change Code of Ethics and Values’. The party said they will continue assessing how the leaders accumulate their assets on a yearly basis as a way of fighting and eradicating corruption amongst their leaders in line with their mandate for transparency and accountability in government. Unfortunately this was all lies and was just putting lipstick on a monkey. The MDC-T leaders never declared their personal assets but they started amassing ill-gotten wealth and are now as corrupt as ZanuPF leaders.

The freedom of expression and opinion campaigner who has been at the fore front of running the campaign to curb Zimbabwe government corruption since 12 February 2009 is using the song to motivate and inspire Zimbabweans to be responsible citizens by asking for transparency and accountability from their leaders. Zimbabwe is on the top list for being a corrupt government and activism of this nature will help to eradicate this problem.

On 10 March 2010, protest singer and socio-political activist Viomak released the Anti-corruption song Chinja maitiro (Change your ways) asking Zimbabwe government leaders to declare their personal assets. Viomak is a pioneer of the Declare Assets campaign which saw her release the single song Chinja Maitiro in which she calls on the opposition party Movement for Democratic Change (MDC) leaders to declare their personal assets to combat corruption and for the opposition party to show that they are not as corrupt as ZanuPF. With this song Viomak is going back into the limelight with a different dimension. In a country ravaged by corruption, Viomak and VOTO (Voices of the Oppressed), concluded that enough is enough so it was time to seek citizen justice and ask leaders to declare their personal assets something that is completely new in Zimbabwe.

The banned singer who confirmed once more that her music and work is still blacked out by Zimbabwe media has amassed a lot of enemies along the way for her truthful lyrics and outspokenness against bad governance and corruption in ZanuPF and MDC, but said she will not be intimidated into silence and is determined to carry the protest art movement until good governance and democracy is restored in Zimbabwe.

Those who have listened to Viomak’s other protest songs will definitely feel the difference in this song. The song is a lively inspirational one that calls for social and political justice in an innovative way. She has manufactured an outstanding sound by doing the obvious, developing protest music for change in a country that desperately needs it. It is obvious that Viomak is headed towards the right direction as she possesses one of the most exquisite modern protest music genres to ever come out of Zimbabwe .This song is an instrument for social and political change and her prowess is more remarkable in that she doesn’t sing for any political party as in this song as well.
The release of the hot sungura beat Chinja Maitiro shakes off any misconceptions and doubts that protest music is a thing of the past. Not in countries where freedom of expression is not a human right. Not in countries that are suffering from social and political injustice. With the song Chinja Maitiro it is not about Viomak’s music protesting only but it is about the music targeting a specific cause.

The highly danceable song begins with high pitched sounds and tones within the infectious harmony followed by Viomak’s voices underlined by a jubilant bass drum and guitar .The song cruises like a ship in calm weather for a while then changes into a more consonant harmony as the verses alternate with the instrumental breaks. The texture of this song is as smooth as yoghurt in a summer afternoon with a melody that is bright and relaxing. The tempo changes in the midst of the many dynamics used within this song. The song remains in a similar pattern as Viomak’s voice comfortably goes through the lyrics with the ease of someone who is so used to recording music. The instruments cohabit very well with her vocals in an amazing way, as she handles her vocals with equal doses of liveliness and style, allowing her activism and determination to show through her voice and lyrics.

The song is a tearful joy to listen to as it captures the brain in the moment while Viomak continues to chant chinja maitiro to ensure the message is not lost in the mix. One can feel Viomak’s passionate heart and steadiness in the song asking MDC-T leadership to declare their personal assets as she repeats corruption no no corruption no no corruption no no. It is honestly hard for me not to recommend this song to anyone. The song is cool and very appropriate for the campaigning purpose it was recorded for as Viomak continues to ask the leaders of MDC, Morgan Tsvangirai, Thokozani Khupe and Arthur Mutambara calling them by name to change their mind sets and declare their personal assets. The way Viomak refers to the leaders as Tsvangi, Argo and Thoko shows that she is giving the leaders a golden opportunity to reflect and declare their personal assets in good faith in a personal and touching way and not looking for a fight with them. This is a sincere advisory song by a patriot who is passionate about combating corruption and having clean good leadership in Zimbabwe. As the song heats up, the texture changes through each instrumental break as Viomak’s fruity melodious voice and the rhythm pass the climax of the song at which point the song races towards the end. It is also at this point that the song and the instruments continue to merge and the combination increasingly getting louder and more infectious until the song ends leaving one with an echo for more. The song is a marvel to listen to and I would recommend all warriors of the Zimbabwe struggle to listen to this masterpiece if they want to remain relevant. The song is a great appetiser that boosts moral and motivates one to keep fighting for a corruption free Zimbabwe.